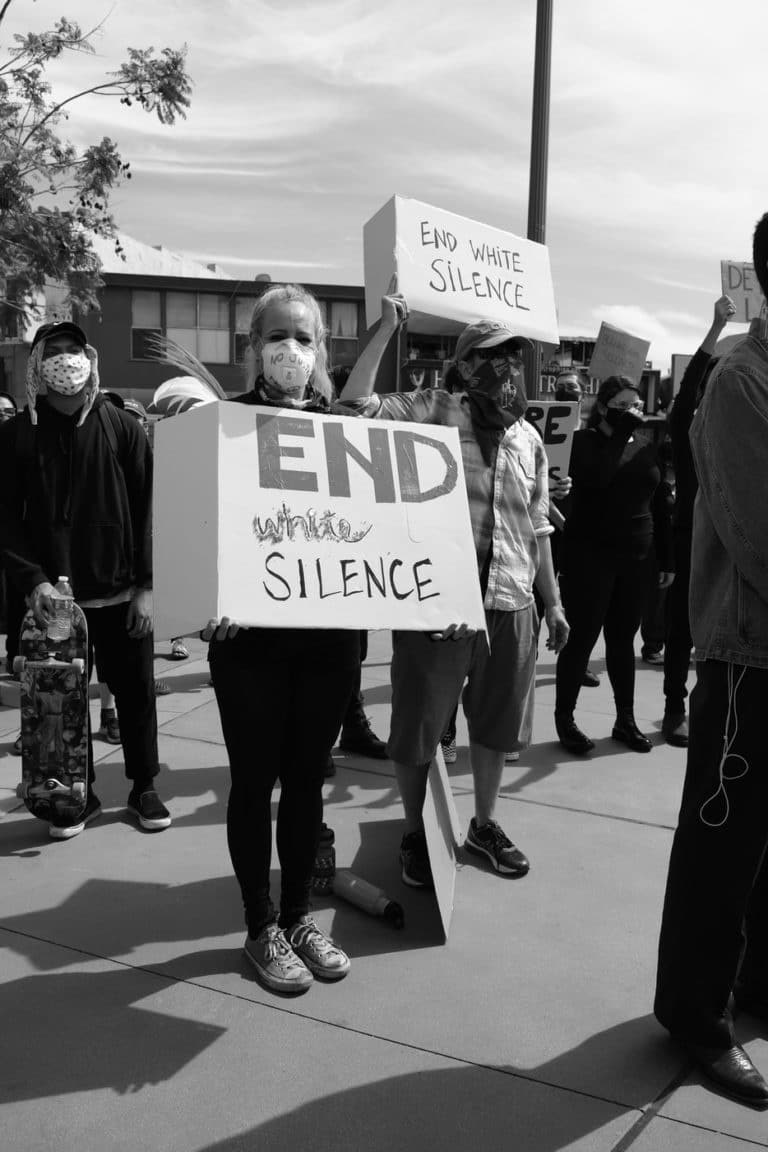 Of Course, I Have White Privilege

I wanted to acknowledge my white privilege. I started by entering ‘white privilege’ into a search engine and found myself surprised by the results. On page one, 50% of the results helped with definitions and the rest for articles that debunked the term as being a myth and perhaps racist to white people. The second page was more extreme, as all the links explained the myth of white privilege.

Do I have white privilege? Of course, I do. Yet I know people of my background would say there was nothing privileged about their life. I’m working class in the most real sense. In my teenage years, my father was a window cleaner, and my mother cooked in a works canteen and money was tight. Let’s be clear, we weren’t in the worst of places, we weren’t in a deprived inner-city area, and both parents were working. I left school at 16 and started on a meandering career path, including being a postman and working in a meatpacking plant. Working-class but still not really deprived. Skint but not deprived. Still privileged because I’m white.

I know all about my white privilege because as I worked through my career path, I didn’t walk into an interview room at any stage and think I was disadvantaged. I was awkward and introverted earlier in my work life. More confident as I moved up the ladder and could engage my interviewers in an easy way. Sometimes even making fun of my own thick Lancashire accent. But never feeling uncomfortable about my skin colour.

In my whole working life, 47 years in work and counting, I’ve been interviewed by a non-white person on one occasion. I did a mid-career MBA in my mid-thirties to atone for leaving school at 16. All the faculty were white. Except for a man from Lebanon and an Asian man, all the students were white. Later in my career, a clinical psychology degree at a leading international business school. The faculty were all white. My class was very international, and the gender split was almost exactly 50/50. One Japanese woman, one Indian woman. No Black people.

Here I was, well down life’s track and noting that my social and professional world was very white. Any interaction I had with the police as a youth had been to do with going too fast in vehicles. I hadn’t been stopped and searched for no reason. I had never had insults thrown at me for being white. No-one had ever asked me where I originally came from. In job interviews, it was about me and my ability to be engaging and tell my story, with no preconceptions.

Looking back, I now realise that my upbringing in an exclusively white town had been one of being steeped in learned and casual racism. It was said that if a non-white family tried to buy a house in the small town I lived in, the council stopped them by buying it. Almost certainly an urban myth, but one which was told with a hint of pride.

The nearest big town had a large South Asian population, given the town’s legacy in the cotton industry. The members of this population were very frequently referred to by the highly offensive ’P’ racial slur, and adults used the word casually. Black, Asian and Jewish people were all to be looked down on and feared, in equal measures. In my early years, I wasn’t even sure what a Jew was. Our interactions with these communities were non-existent, but I knew they were not to be trusted. I hadn’t encountered Black people but had been led to believe they were not be trusted.

I didn’t feel racist, but I fear that I probably went along with casual racism as a boy. When I got older, I wasn’t racist. Yet it’s taken until all too recently to understand that I should have done more to be anti-racist. Saying I don’t agree with the thousands of comments I heard earlier in my life. To object when meeting with senior directors who referred to staff in a factory I managed as though they were some species of not to be trusted aliens, simply because they were Indian. To ask why there were never any Black or Asian candidates on the short-list for roles I was looking to fill. So comfortable in my white privilege that I didn’t invest in considering the issues. Not racist, but not anti-racist.

In my late twenties and early thirties, I coached sport and worked with a lot of Black athletes, my first real engagement with people who didn’t look like me. I didn’t give it much consideration; all the players I worked with were players. Not Black or white players. There I was again, not racist. But still not anti-racist. It was my first interaction with men from Black communities in inner cities. The first time I heard comments about the police, about stop and search. About being long term unemployed, about small-time crime as a means to get by. Doing a bit of coaching work with juniors and seeing them turn up to practice looking bedraggled and realising their gaunt and scruffy appearance was an everyday, every year deal.

I became very close friends with a Black man who was British by birth and had Jamaican parents. We are the best of friends to this day. We regard each other as being able to call on the other to help, no matter what the situation. That’s come to bear for one or the other of us many times over the years. I understand this sounds like my ‘I can’t be racist because my best friend is Black’ speech. But it’s the opposite, and it’s because it has put me in pole position to understand my white privilege and his struggle as a Black man. A respectable, hard-working man. Whose biggest drawback is the colour of his skin.

I’ve known him for slightly over thirty years. Five years ago, I asked him why he had a Spanish surname if his family was from Jamaica. ‘It’s my slave name’ he replied and went on to tell the story of the plantation owner who enslaved his ancestors generations ago. I’m not racist. But it took me a bit over twenty-five years to be curious about his name. It’s never occurred to me to enquire anything about his background. Not racist, but not interested enough. Why get into uncomfortable areas when my white life is going along quite well?

We’ve known each other for a long time, and it’s only in the last years we have discussed race openly. Discussed why he bought a very upmarket new car. Because if he turned up in his previous well-worn VW Golf, he would be regarded as ‘just another dodgy Black guy’ when he was arriving to talk to new clients for his successful company.

Discussed him sitting with his now university-aged son and having to say to him ‘come to terms with the fact you’re Black, and it won’t all be fair’ in a life advice discussion with him. I asked two other Black men about the speech my friend had given his son. The first said it was much more common than I would expect. The second said his mother gave him the speech because his father was long gone. But he had the speech, over and again.

Blinded By My White Privilege

I can reasonably say I’m not racist, but my life is so cocooned that these things haven’t occurred to me. And I’ve got an enquiring mind, it’s fair to say. I’ve been a good and loyal friend; I know that. But I could have been an even better friend and empathised a great deal more. Had I not been blinded by my white privilege. There hasn’t been that pain and rejection and discrimination in my life, so I haven’t been open to empathy. My life isn’t directly affected by racism, so I roll through life not affected by the colour of my skin.

But what to do with my white privilege now? What to do with the fact that I’m not racist? It’s all very passive of me to say that I do have white privilege and I’m not a racist. I heard the term anti-racist quite often recently, and that got my attention. I wondered what the difference was between “not racist” and “anti-racist”. So I looked up the work of John Amaechi. I saw him speak at a sports dinner a few years ago and was truly inspired. One of the few times I’ve felt compelled to go and find a speaker and thank him. I’ve seen him in media a lot recently, providing insight into the current race discussion.

“Amaechi” and “anti-racist” led me to this excellent three-minute video and it captured me perfectly. Most certainly not racist. But not inconveniencing myself or taking a risk by being openly anti-racist. I’ve very seldom drawn it to the attention of someone for their being racist. People I like and admire have been racist in front of me, so I’ve cringed inside and carried on. Perhaps mentioned it to someone later. Recently I openly challenged someone I admire for making actively racist comments, and the conversation didn’t go well. But that person knows where I stand now.

What I need to do is make my stance clear more often. My most significant risk is that someone is offended and doesn’t like me as much anymore. Or I feel a bit uncomfortable saying my piece. Both of which are trivial when compared to Black or minority people dealing with overt or covert prejudice and discrimination most days of their lives. It’s time for me to advance anti-racism, to do my part. To have more courage to experience what Black, Asian and people from other minorities experience all through their lives.

I have to accept my white privilege. Then I have to do something with it. I have to use my whiteness to say I’m against racism at every opportunity, in speech and action. If I don’t do that, then I’m part of the problem. Silence is collusion. It’s a betrayal of some of my friends. White silence can contribute to society missing a once in a generation opportunity to make life just a little better for Black, Asian and minority ethnic people.

1 thought on “My White Privilege”